The team at Canada Bay Club has been digging around in the history books again, looking for interesting tidbits about our local suburbs. In the second of our blog series about the City of Canada Bay’s suburbs, Five Dock’s facts are in the spotlight. This historic suburb holds a special place in our hearts at Canada Bay Club because it’s our home! Take a read through the vital stats and fascinating stories behind the incredibly colourful suburb that is Five Dock. 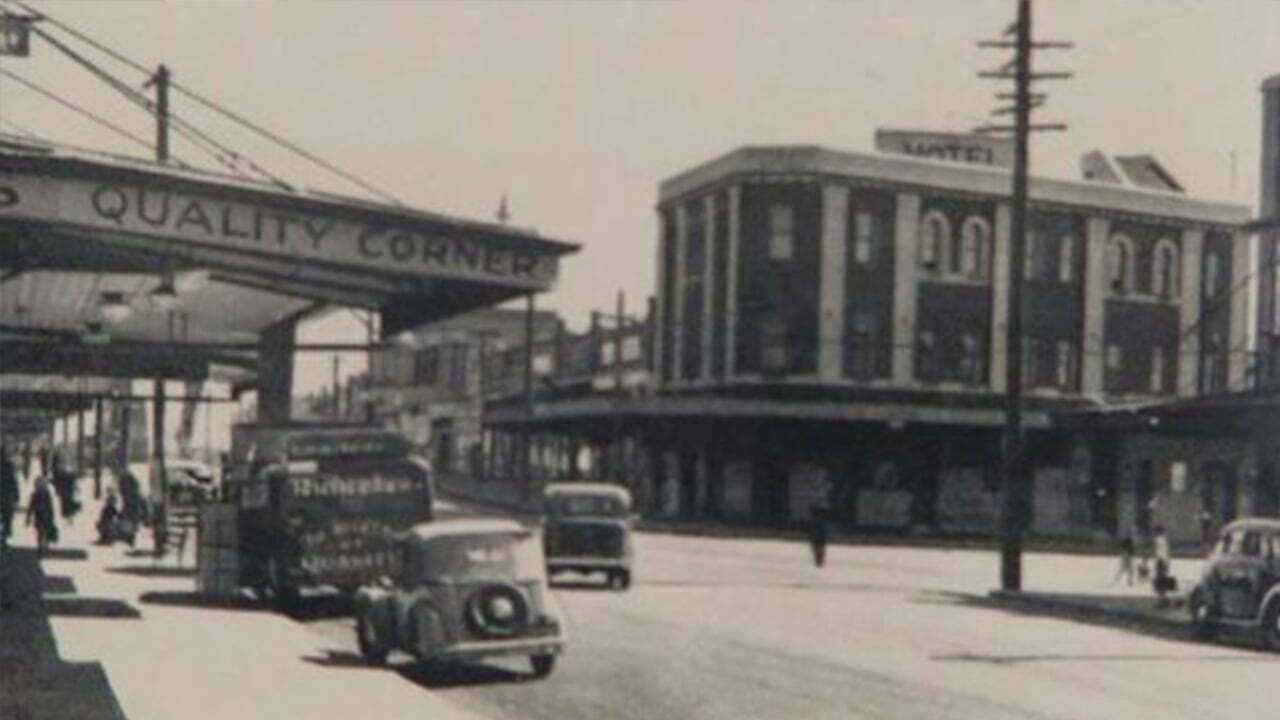 Five Dock is home to about 9300 people. At a 10km drive from Sydney’s CBD, Five Dock makes a wonderful home for its community boasting diverse backgrounds and age profiles. Five Dock sits between Parramatta Road and the City West Link to the south, and Hen and Chicken Bay on the Parramatta River to the north. According to the 2016 Census, 61.9% of its residents were born in Australia. Outside of Australia, the most common countries of birth were Italy 8.2%, England 2.9%, China, 2.8%, New Zealand 2% and Hong Kong 0.8%.

Five Dock’s cultural heritage lies in its Italian influences, with amazing local providores and restaurants scattered throughout the suburb. It’s also home to amazing waterside parks, walks and other recreational facilities. Alongside the more than 150-year-old Five Dock Public School, other educational sites include historic Rosebank College and Domremy College. Enjoy traveling through time with these top 10 historical tales of Five Dock.

Before colonisation, the City of Canada Bay is believed to have been part of the traditional lands of the Wangal clan, one of the 29 tribes of the Eora nation. The Wangal people lived in the City of Canada Bay area for thousands of years before European settlement in 1788. The local area of Hen and Chicken Bay was a meeting place for Aboriginal people from Port Jackson and the wider Sydney region and represents an important cultural and historical site within our city. The Parramatta River, as it’s now known, was a hub of traditional food gathering, however the Wangal people also hunted animals, harvested plants and gathered raw materials in the area. 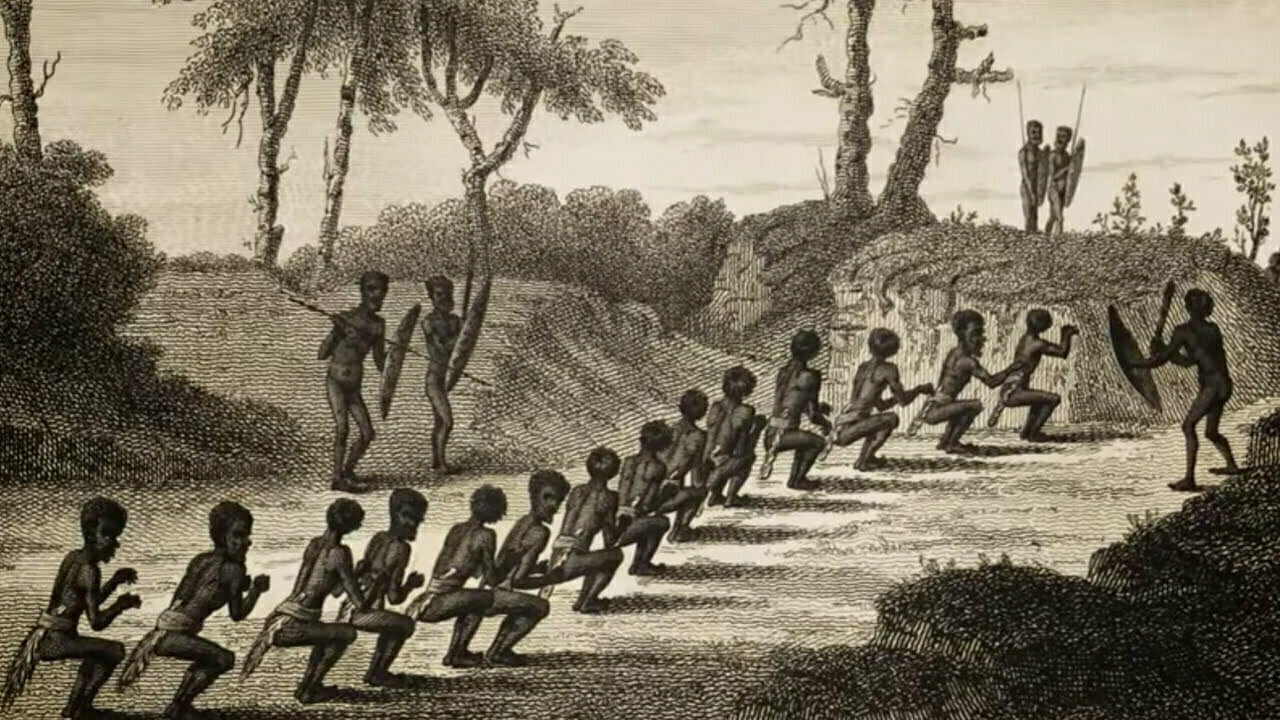 How Did Five Dock Get Its Name?

The earliest documented reference to Five Dock is in the Sydney Gazette, 3 February, 1805. It’s thought the suburb’s name has its roots in the five natural indentations along the Parramatta River that looked like docks. In 1806, Governor King granted this bay to military surgeon John Harris, who named it Five Dock Farm, which comprised the entire bay, including the current-day suburbs of Five Dock, Abbotsford, Drummoyne, Chiswick, Russell Lea and Rodd Point. Mr Harris sold the farm to Samuel Lyons, a former convict who by this time had become a wealthy citizen of the area. Lyons Road celebrates Samuel’s contribution to the development of the Five Dock locality.

Mr Lyons subdivided his Five Dock Farm land into 30- and 60-acre plots, where large residences began to pop up over the following decades, and their inhabitants began naming the area after themselves. Rodd Point was named after the Rodd family, who built Barnstaple Manor in 1845. Russell Lea was named after Russell Banton, a pastoral and mining magnate. Erina Avenue, a cul-de-sac near Five Dock Park, was named after a residence on the street. This magnificent home has been restored but it used to be surrounded by vast grounds and even boasted its own vineyard. Many Five Dock streets are named after mayors, aldermen and other local government identities, including Henley Marine Drive, named after politician Sir Thomas Henley, described as one of the most prominent figures in NSW’s public life at the turn of the century. 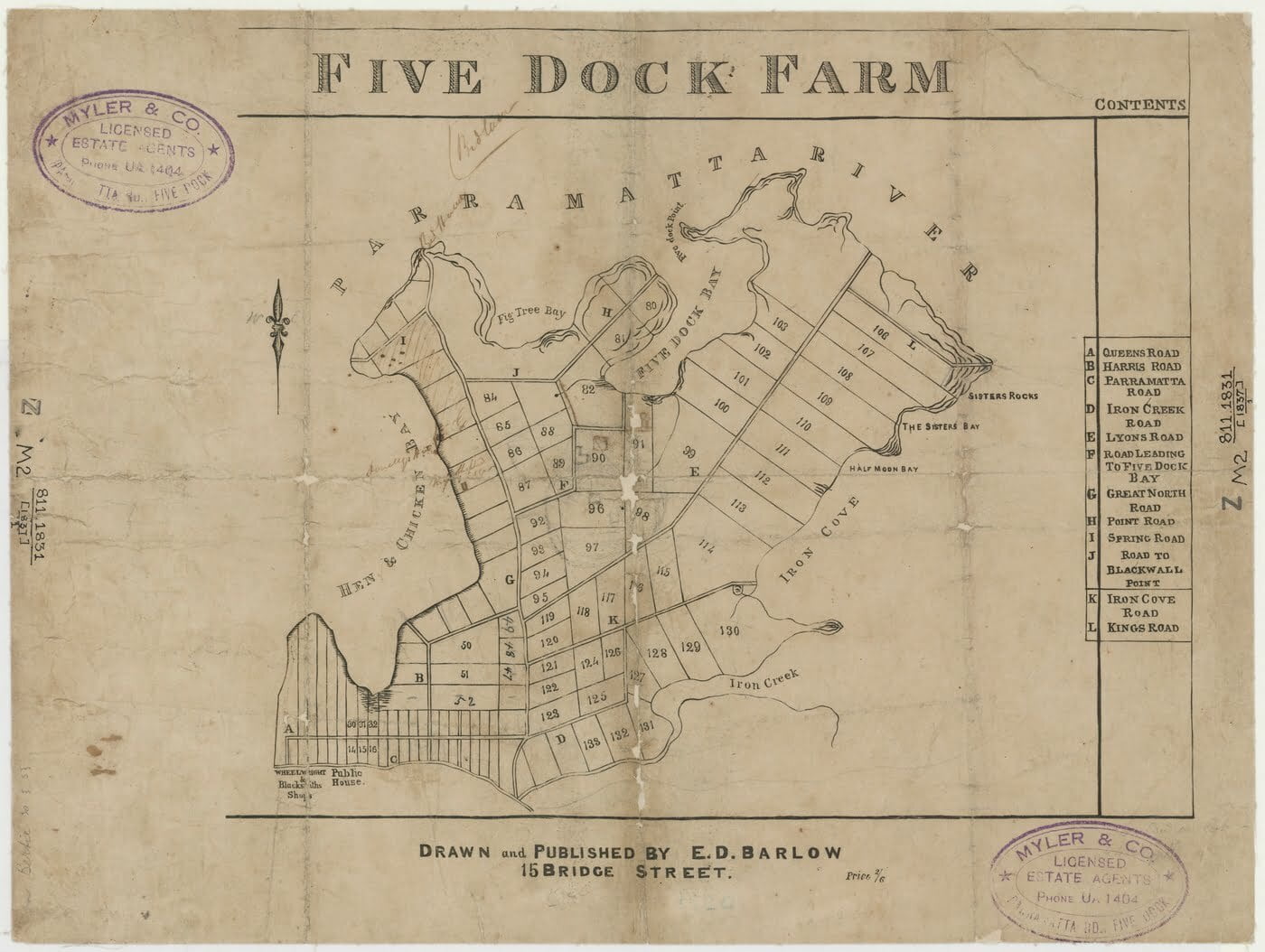 As transport facilities were enhanced in the 1800s, Five Dock experienced rapid population growth and with quick development, the area soon lost its semi-rural reputation. In 1836, Five Dock was the recipient of the “Emu”, the area’s first ferry service. But the greatest catalyst for population rise was the installation of the tramway system in 1890, which became one of the largest and most efficient tram services in the world. Private motorised buses began running in the early 1900s, then in 1933 government bus services became the mainstay of the public transport system and this pushed Sydney’s tramway system off the grid. 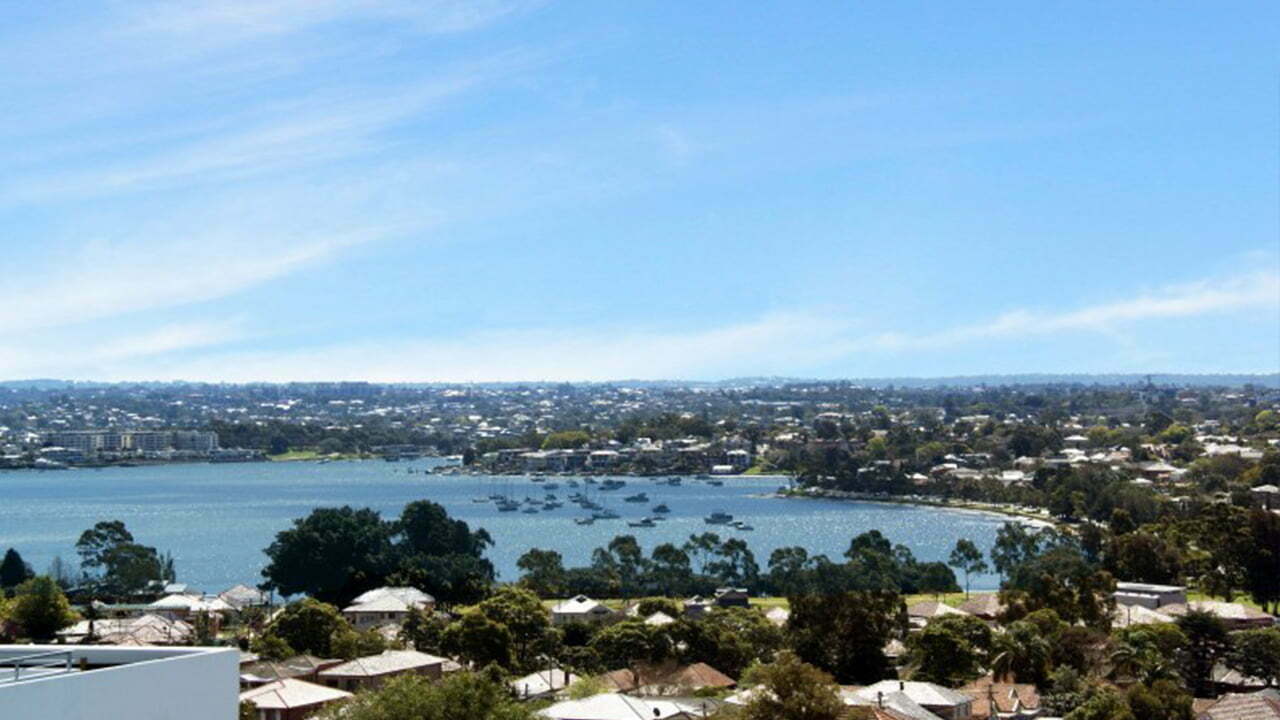 From the early 1900s through to the 1930s, a significant number of Italian immigrants, specifically from the Aeolian Islands, a volcanic group of islands off the north coast of Sicily, moved to the local area. As a result, Five Dock and its neighbouring suburbs were enriched by the culture of this vibrant country, with Italian food stores, restaurants and so many other influences still making an impact on the community today.

To celebrate Five Dock’s rich Italian heritage and the influential role the Aeolian people played in the Five Dock community, the inaugural Ferragosto Street Festival kicked off in 1998, and has since been held annually every August. Originally held in the Garfield Street car park for the first few years, it’s now held on Great North Road, recently expanding from Queens Road to Lyons Road – about 800m in length, including most side streets. In 2018, Ferragosto will be held on Sunday, 19 August on Great North Road, 10am-4pm. Follow the festival’s Facebook page to stay tuned for more details.

The story of one of Five Dock and the City of Canada Bay’s most well-used roads, Great North Road, stretches back to 1828. Surveyor-General at the time, Sir Thomas Mitchell, marked out a new line of road passing through Five Dock Farm, which was to become Great North Road. It was built using convict labour between 1826 and 1836, and extended 240km north from Sydney to the Hunter Valley. The Five Dock to Abbotsford section of the road is the only section still retaining the original name, ‘Great North Road’. When the convicts began constructing the road, the area was incredibly rural, covered in trees and bush land. For its time, the road was a significant engineering achievement and today a section of the road has World Heritage listing. Read more about the fascinating history of Great North Road here.

As the area grew in population in the 1800s, Five Dock’s children needed to be educated. The first school of the area was located in St Albans Anglican Church. The building served as a school, a church and a rectory, and it eventually became the site of Five Dock Public School in 1861 with the foundation stone of the official school laid in the grounds of the church in 1858.

Five Dock Public School not only boasts a rich historical story, it’s also the school at which the composer of Australia’s national anthem was headmaster. Peter Dodds McCormick wrote Advance Australia Fair in 1866, under the pen-name ‘Amicus’, meaning friend in Latin. It was first performed in Sydney on St. Andrew’s Day in 1878, however possibly its most significant performance was at the inauguration of the Commonwealth of Australia in 1901, where it was sung by a choir of 10,000 people. In 1907, the NSW Government awarded McCormick £100 for his composition, but the song was not formally declared our national anthem until 1984.

This incredible playground at Timbrell Park on Henley Marine Drive is one of Five Dock’s most pride-worthy landmarks. Thanks to a grant from the Touched by Olivia Foundation, this amazingly dynamic play area was converted into a fully inclusive play space, accommodating children of all ages and abilities. The oversized slide is just big enough for an adult to accompany a child that may not be able to support him or herself, or just for friends sliding down holding hands. The elevated sandbox is designed to be accessible from a wheelchair but to others it’s simply another seat. It’s Australia’s first all-abilities playground and was named the Best Playspace in Australia by Parks and Leisure Australia in 2010. With Livvi’s Café, right next door, there’s a reason for both parents and children to visit this innovative community spot.